Douglas Messerli | "Tall Tales" (review of his LA Louver gallery show "The Exact Moment It Happens in the West: Stories, Pictures and Songs from the '60s 'til Now")

Terry Allen The Exact Moment It Happens in the West: Stories, Pictures and Songs from the ‘60s ‘til Now / L.A. Louver gallery / I attended a walk-through of the show Thursday, July 18, 2019

Terry Allen’s art is a wild jumble of drawings, paintings, stories, videos, musical albums, radio plays, sculptural figures, live performance, and other works on paper, through the years narratively woven together in large and sprawling groups, represented by what one might describe as symbolic objects in this large retrospective show, The Exact Moment It Happens in the West, at LA Louver Gallery in Los Angeles. As the title of the show suggests, Allen is an intensely “western” artist, beginning with his “Cowboy and the Stranger” series (1969), and moving into his important recording album Juarez (1975), most of the early works relating to his upbringing in Lubbock, Texas, despite his birth in Wichita, Kansas.
Allen’s work is all about the stories that collect around his works; as he himself observed: “I realized what I really wanted to do was tell stories.”
Yet Allen’s stories, expressed in so many mediums, are anything but simple story-telling. Even with the limited images and objects displayed in this show, the LA Louver presentation make us realize that his narrative is anything but the standard notion of fiction and moves, instead, into a kind of wry experimentalism that might easily be labeled as inscrutable and even obscurant. 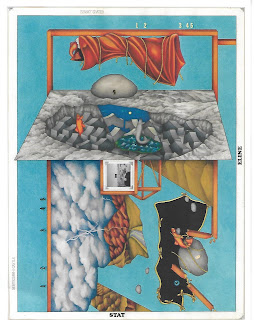 While some of the later works from the “Memwars” series (2018-19) such as “The Exact Moment,’ seem visually to create a kind washed-out nostalgia for the western myths that permeate so much of his work, earlier pieces such as the fascinating “Stet Eline (Juarez)” from 1969-75 appear as far more surreal-like collages, with clouds, brain and other organ-like images, and a stream filled with fish and seemingly concrete blocks delimiting their natural movements. A bit like a film-clip out of Dali movie (on the left side and top we perceive the kind of notation, “1 2   3 45” consigned to the frames of earlier motion pictures. But put together it is difficult to create a coherent story or tale in viewing this work. With Allen, the perceiver needs to take in a wide collection of his images, interrelating and mentally combining them, taking the parts and collage-like making of them through mental gymnastics into a whole.

But then that is not only the challenge of Allen’s art, but its marvel. The stories this artist tells are not gentle fables, but fabulous legends which the viewer and listener must put together to tell the true tale.
Allen further challenges us by employing so many personal aspects of his life as in the series of “Ring” (1976-80), which explores his marital strife with his long-supportive wife Jo Harvey Allen, ending in a small mock-up of a wrestling ring where two puppets play out the brutal dissonance between the two, which, at times, of course, might be represented as coital intercourse. 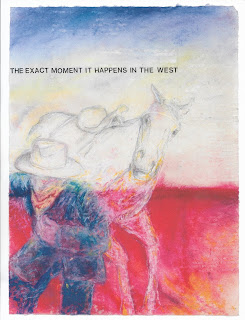 Another of his series, “Anterabbit/Bleeder” is loosely based on a childhood friend, a hemophiliac evangelist/gambler.

Allen’s large body of work titled “Youth in Asia” (1983-93) represents his memories of numerous friends who served in Vietnam, having been betrayed by the US government or simply destroyed in the process. After numerous paintings, photographs, and sculptures, he closed this series with a music album Amerasia and a radio play, Torso Hell.
This artist’s work, even in its vastness, let alone its often private and personal allusions, is clearly a tough bone, at times, on which to gnaw. One might have to follow Allen through his entire life and the art through its many manifestations to come to understand him and gain a true enthusiasm for them. I realized that if only I had the time to return again and again to his art, I might realize his true significance. I must admit that first meeting him during a show at another area museum years earlier, I was not impressed. But this time I was. And I think Christina Carlos, who helped bring this show into existence, has done an excellent job in revealing this sometimes rogue artist’s vast output.
This show lasts through December, and I most certainly will attempt to see it once more before it disappears. I believe that you could visit Allen’s work time after time without knowing fully how to read its narrative. But isn’t that what great fiction is all about?

Posted by Douglas Messerli at 9:00 AM