You must see this piece, on the artist Merion Estes' Unnatural Disasters, which opened in September at the Craft and Folk Art Museum in Los Angeles (an increasingly important museum in a city with many great institutions), as an appreciation rather than a review, particularly since it was curated by my companion, Howard N. Fox. I already did review a smaller show of her work in Hyperallergic Weekend in March of 1917.
As I mentioned in that earlier writing, Estes, an early participator in the Art and Decoration movement, uses store-bought patterned fabrics made in Africa, Indonesia, and Japan, applying acrylic paint to many of them, while adding collaged art, or decorating them with stencils, glitter, and other materials, resulting in wild swaths of color which almost always first present themselves as objects of utter beauty—and, no, you can’t get away from that word in observing her works! So intensively complex are her resultant images that it is truly difficult to separate the wonderful original fabrics from what she has applied upon them. As Constance Mattison describes Estes’ artworks:

Yet at the same time while the eye takes in the pleasures of these works, Estes’ art, upon closer observation, presents a kind of paradox. When we begin to make sense of what Fox calls these
“waving flags for beauty,” we begin to perceive something else is going on, that the almost Edenic-seeming natural worlds which she presents us of that world contains something wrong. For example, in the stunning featured painting, Cooling Trend (from 2017), we perceive that the yellow, coral, red, and green patterns that make up most of this work are representations of climate heating, a landscape filled with dragons, black ravens, several suns that seem to be reproducing small microbes like a contagion of cancer. The only truly hopeful element of this work is a narrow white swath in the very center of piece, where tiny minnows seem to be happily surviving in the “cooling trend.” In short, the very vibrancy of this piece belies the sad truth of the oceans’ and rivers’ destruction. 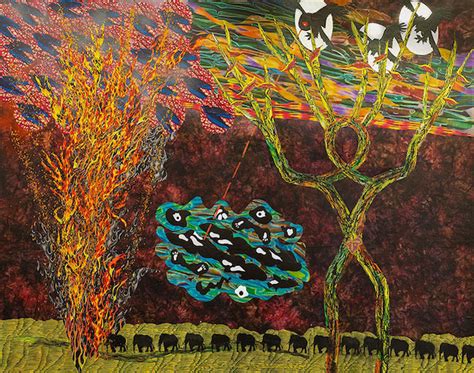 Other works are more obvious in their straight-forwardness. If one might first notice the lovely elephants marching through the veld in Desolation Row (2013), we also immediately recognize the terrifying human-like image of a dead tree that dominates the work and, even more, horrifyingly, the collage of flames into which the miniaturized pachyderms are destined. In between them lies a frighteningly black-laden cloud of footprints, bones, and other fragments that suggest the end of such former beasts’ lives.
Similarly, if the lovely waters of Storm Watch, with their swirling blues, reds, and yellow ochre, we quickly recognize these as noxious waters threatening the already skeletal ship in the upper right, a vessel flanked by a phalanx of ravens set across dark oranges and almost sickening yellows. Yes, this is also a beautiful work on first sight, but we realize that for any humans in this scene, the storm is nearly over, and like the crew of The Flying Dutchman, the sailors and the passengers may already be dead.
As Max F. Schulz writes about her work, while Red Tide (2003), with its pinkish reds, bands of blue, and almost cartoonish yellow blob with black eye-like features, might at first appear a bit like a dizzying mix of sprightly imagery:

The painting depicts the yearly bloom of phytoplankton, a single mic-
roorganism, which reproduces daily through cellular division to create
massive populations that can stretch over thirty-miles in places. The
extraordinary life force of this annual explosion of algae for several
weeks or more each year on both California and New England coasts
[more recently on the Florida coast] perversely sucks up the ocean’s
oxygen and blocks the lower depths. The result is massive death of
fish trapped in waters under the bloom.
As Fox writes of the almost electrifying Smithereens (2012):

The surface is a visual explosion of energy: a latticework of flame-like
reds and oranges suffuses the upper portion of the picture, as spider-
like black spikes, evoking smoke and ash, interpenetrate the “flames.”
The lower portion depicts bulbous, swirling waves [they are pieces of
printed fabric collaged onto the painting’s surface], referencing the
tsunami that destroyed the power plant and precipitated the nuclear
catastrophe. The marine life that perished due to the disaster is repre-
sented by the dozens upon dozens of fish eyeballs staring out from the
painting; those ocean inhabitants might well have survived the
tsunami of the Fukushima disaster, but they did not survive the radi-
ation and toxins released into the habitat. Their eyes stare out at us like
witnesses to a guilty misdeed.

If Estes’ works are, in some senses, beautiful depictions of the natural world—and they truly are—we have now come a very long ways from the 19th century male-dominated Hudson River School painters. No, Dorothy, we can never ever return to the wheat-fields of Kansas.
This artist’s works present us with not just a paradox, but represent a kind of conundrum: how to see the beauty in the very destruction of the world around us, or, perhaps more accurately, how can we find in the complete devastation of our planet any beauty?
Perhaps by using the very fabrics upon which she presents her concerns, Estes has found a kind of deep beauty created by human hands, minds, and visions that project a world far more wiser than the one in which we live.
I have now been to see this show three times, and each time I have been immediately wowed by the stubborn beauty of her work, and yet have teared up for the messages that these amazingly- alive images convey. Why Estes’ remarkable work is not better known, I cannot comprehend. It seems necessary, almost, if we are to survive.