I must immediately admit to the reader of this essay that my review of the wonderful new show, Playing with Fire: Paintings by Carlos Almaraz, could not possibly be an objective one, as it was curated over a period of several years by my husband and partner of 47 years, Howard N. Fox. 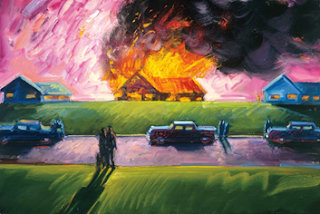 Yet, even if somehow Howard and I had never met, had I seen this show I might still be startled by the beautifully colorful Almaraz canvases. This is, simply speaking, a breathtakingly luminescent show that reveals the work of a major Los Angeles artist who has never quite gotten the attention he has so long deserved.


Part of the problem, can be tracked back to the fact that he died of AIDS in 1989 at the very young age of 48. Just as importantly, for many years the artist was perceived, primarily, as a Chicano artist, co-founder with Frank Romero, Gilbert Luján, Beto de la Rocha, and, later, Judithe Hernández of the famed Los Angeles Chicano group, Los Four.


After a brief stay in New York City with his boyhood friend—later actor, agent and performer—Daniel Guerrero, at a time in which the New York-centric art world was, as Fox notes, “critically and commercially focused on the exaltation of austere visual vocabularies and industrial materials”—all quite antithetical to a young man influenced by European impressionists and Mexican muralists, Almaraz returned to Los Angeles in despair. Fox writes of the art he created from his New York visits:

Few of his paintings from the period survive; those that do
include a number of rather stifled-looking gridded works,
worlds apart from the exuberant colors and dreamy figures
that would populate his mature work.
Yet within these grids we can see a kind of coded imagery that surely had little to do with  grid-based artists such as Sol Lewitt, Frank Stella and others. Clearly, Almaraz did not find his milieu in the center of what was then defined as the art world, and upon his return to Los Angeles had a sort of psychological breakdown ending in a bout with alcoholism and acute pancreatitis in 1971 which nearly killed him. He spent six weeks in a hospital, much of it lying in a drug-induced coma.


Upon recovering, Almaraz sought a new identity as a Chicano artist, immersing himself not only in the activities of Los Four, but becoming active in Cesar Chavez’s farmworkers’ causa, painting banners for rallies and backdrops of playwright Luis Valdez’s Teatro Campesino (Farmworker’s Theater). At home he worked with others, including his future wife, Elsa Flores, on large mural works which easily assimilated iconography that spoke to the Chicano cause.


Utterly committed to his new perspective Almaraz even wrote a manifesto that called for “an art that is not private property,” an art that did not involve the studio, good taste, or, particularly, “quality”—“It must be loud and con mucha fuerza [with great force] The “enemy,” he argues, “is not the white man, but rather his BankAmericacard, his swimming pools, his art, and his ways that enslave the world.” (Ironically, Bank of America, which loaned three of his works to the show, helped underwrite  the exhibition.)


Yet, during all of this period Almaraz was still suffering from a kind of inner crisis, suggested in his own definition of himself as an American artist who just happened to be of Mexican birth. At home, he argued, we did not call ourselves Chicanos, but Americanos of Mexican origin. His first year in his new country had been spent in Chicago, where he attended school with a diverse group of Americans; and now, having proselytized for recognizing and celebrating an essentialist Chicano identity, he began, perhaps, to feel somewhat confined within the more narrow confines of his new identity.


Other than that, Almaraz was gay, or at least bisexual. Although all his friends knew of his sexual interests, his parents were left in the dark, and, interestingly enough, nearly every one of the articles written about him and his work apparently dared not once mention his sexuality. It would not be the first time that gay or bisexual artists were kept in a closet by the communities they represented. Langston Hughes and several others of the Harlem Renaissance artists were “protected” and closeted by their black counterparts and later estates, who refused to grant permissions to speak of the writers and artists within the gay context.


After producing a mural for the Los Angeles hit play Zoot Suit, author Luis Valdez directly confronted Almaraz: “You’re very talented, and you’re really doing too much. You really should do more of your own work, and in that way you will give people guidance.” In the same year, 1979, Almaraz had already disavowed his connections with Los Four, and soon after, he returned to the studio to create “his own” art.


As Fox makes clear, the flurry of creative activity that resulted was so radically different from what he had created before that some friends described him as a vendido (a sellout). These new works quickly began to sell to collectors on the West Side of Los Angeles, the polar opposite of his East Side Los Angeles roots and home to the Chicano community.


These new works, as Fox notes, represented a “far more introspective mood that was nuanced and ambiguous.…These works still depicted the sights of daily life of Los Angeles, but now they became deeply interior, indeterminate, and more illustrative of his inner musings than of communally shared understanding or experiences. Almost inevitably, Almaraz wandered into the far less logical territory of the human imagination, exploring dreamlike narratives.”


Surely his marriage to Elsa Flores in 1981 and the birth of their daughter Maya (now a beautiful woman who is an evolutionary biologist) gave him a new center which allowed for these amazing works’ creation. But as Fox hints, although never completely states in his catalogue essay, these same images suggest Almaraz’s life-long tensions being worked out in paint and pastels.


The images of the dangerous, proud, and powerful jaguar appear time and again, suggesting the artist’s relationships to that iconic Mesoamerican figure. The numerous spectacular car crashes, as Fox has suggested in private and public tours, might almost be read as metaphorical self-portraits, the stunningly colorful  and almost abstract images wiping out the fact that they surely represent the drivers’ deaths.


Houses in neatly kept neighborhoods suddenly catch on fire. Los Angeles skyscrapers shake and sway, not only suggesting the dangers of the city’s always impending earthquakes, but hinting at the very pleasures of just being part of the downtown skyline. Monet comes to Echo Park, but unlike the great Impressionist’s works, these idyllic landscapes are filled with secretive lovers and other mysterious figures at different times of day. Nearly everything in Almaraz’s art is magically animate, human beings and nature shimmering with appetite, the possibly dangerous and marvelous deities such as the Jaguar interloping across the LA landscape a bit like King Kong in New York.


In 1987 the artist learned that he had contracted HIV, but it didn’t stop him. Almost madly painting up until the hour of his death, Almaraz continued to create a personal landscape of the city he so loved, intertwining his fantasies with the realities he knew by heart.


His works today reveal such a painful tension between the internal and external worlds that it would be almost impossible to observe his oeuvre if it were not for the sensual pleasure with which he renders them. These are often dark works, filled with what one can only imagine as the suffering of the artist rendering them, but even in the most shaded of these works we see the beauty, the splendor, the simple joy of life he must have felt.


At an interview between Fox and Flores the day of the public opening, one of the audience members stood up to declare something to the effect that: “The problem is not that Carlos Almaraz was more than what could be contained by the notion of a ‘Chicano artist,’ but that the notions of what that means delimit the very comprehension of what being of Mexican heritage truly represents.” I couldn’t imagine of a more profound statement of cultural identity.