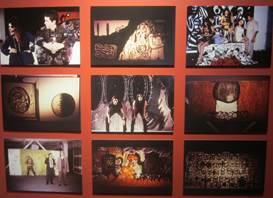 Posted by Douglas Messerli at 7:45 AM 2 comments:

the feminist scent
by Douglas Messerli

The “new” show at Los Angeles’ Sprüth Magers galley in the Miracle Mile, is actually an older one, a follow-up not only of the Berlin show in 2015, but a work that featured the same five artists who Monika Sprüth first showed in her Cologne gallery in the late 1980s, Eau de Cologne, which also resulted in a magazine published by Sprüth from 1985-1989, which featured “portraits, interviews, conversations and essays with many other contemporary German and American artists” of the period, most of whom have now become major international figures, but were often ignored and underestimated at the time of that original Cologne show.
Today, Cindy Sherman, showcased at the current Broad Museum of Art show in downtown Los Angeles, Barbara Kruger, who is featured at the Broad building of the Los Angeles County Museum of Art, and Jenny Holzer are well established, and, although lesser known in the US, Louise Lawler and the German artist Rosemarie Trockel are now internationally recognized.
Accordingly, I can’t report that I was totally wowed by this show, although I appreciated its historicity, and admired many of the works that it contained. Holzer and Kruger both, despite their popularity, have always presented problems for me, since they center their work on language, but simply do not have quite have the skills of my poet friends. At least Kruger, in her Dazed and Confused series combines her short narratives with images of slightly “dazed and confused” figures which give her work a kind of powerful narrative energy. Holzer is at her best in the more aphoristic horizontal LED signs, as in the show’s Survival and Living, than she is in her black granite benches with their purposely “poetic” sounding, but actually quite incoherent messages. I liked the show’s spray paint on canvas Lady Pink, despite its rather unoriginal and didactic statement: “Trust visions that don’t feature buckets of blood.”
Cindy Sherman is hard not to like, but these works, representing her Murder Mystery series of 1976, show the artist in a very different context from her usual self-portraits. If her portraits represent various articulations of identity and gender, these far more narrative sequences reveal the fictional processes at the heart of her art, expanding the more autobiographical genre she has established since, and which is at the heart of Broad’s extensive collection.
Even more fascinating were Sherman’s photographic images of dolls from 1999, featuring the odd figures in numerous sexual poses that recalls the work of German artist Hans Bellmer. These works, in fact, connect to many of her grotesque self-portraits later in her career, while yet revealing a completely different aspect of her art. These Broken Dolls are, in fact, all sexually destroyed, ready to be tossed away as perversions of the Barbie world in which they might once have existed.
Louise Lawler’s stunning large painting (Bunny) Sculpture and Painting (adjusted to fit) from 1999/2015 features images of Jeff Koon’s Rabbit (1986) and Peter Halley’s The Acid Test (1992), while recontexualizing those male artist’s works in terms of context and space.
Most astonishing to me were the “wool” pictures of Rosemarie Trockel, created, so the gallery handout explains, by wrapping loose strands of yarn around the canvas in stripes, creating beautifully vertical bands that might have been at home in The Washington School of Art typified by Gene Davis and Anne Truitt, while, on the other hand, referencing a feminist context through its very materials.
It’s a treat to have this new galley, directly across the street from our home, in Los Angeles. And I look forward, after their early shows of John Baldessari and George Condo, to their future exhibitions.

In March of 1992, Howard curated a show by German artist Gerhard Merz at the Los Angeles County Museum of Art, titled, Archipittura. At the time Merz was living with Philomene Magers, the co-gallerist of what is now the Spürth Magers Gallery of which I write above. We had lunch with them a couple of times at one of our favorite local restaurants, the Italian eatery La Trattoria, which they had discovered by themselves, and where, because of its excellent cuisine ate most of their Los Angeles meals. I took the Chilean author José Donoso to the same restaurant when he visited Los Angeles.
Posted by Douglas Messerli at 3:13 PM No comments: