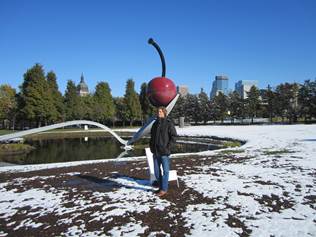 Much has been said and written over the years about Oldenburg’s works, and I am sure that have no significant new perceptions to offer. But as those who regularly read my cultural essays know, that has never deterred me in the least. Let us just say, I’ll offer some rather simplistic observations and comparisons of Oldenburg’s works with others artists of pop-art, and how this show reconsiders the artist’s overall achievement.

What immediately becomes apparent in viewing again so many of Oldenburg’s “objects,” is than unlike several other of the pop artists, such as Andy Warhol, Oldenburg was seldom interested—the most obvious exception being his recreations of Mickey Mouse—in the iconic and celebrity figures. Warhol chose his soup cans because, Campbell soup was the best known of soups. And similarly, the figures he chose to paint—Mao, Elvis, Liz, Jackie etc.—because they were celebrities. Warhol’s world was popular in the sense of “popularity,” while Oldenburg’s pop was of the everyday things we used and ate, the combination represented in the Walker’s great sculpture, “Spoonbridge and Cherry,” an ordinary arched spoon at the tip of which sits a stunningly red cherry. The subjects of Oldenburg’s work are generally the opposite of icons or celebrities, but represent found objects or such everyday things as a tube of lipstick, a suit, shirt, and tie, an ice cream cone, a connecting plug, an ashtray filled with cigarette butts, a vacuum cleaner, shoe-string potatoes spilling out of a bag, etc. The very ordinariness of these objects suggest their meager roles in our lives; yet, with great Dada-like humor, by blowing them up into gigantic versions of themselves, we can only rediscover their true importance in our consumer existence. If, by comparison with Warhol’s widely popular “things,” Oldenburg’s objects seem of minor worth, we realize in his gigantic presentation of them just how necessary to everyday life is the plug, an ashtray, and vacuum, even an ice cream cone! They are far “bigger” in our lives than Elvis, Mao, Liz, or Jackie Kennedy could ever be.
That Oldenburg, throughout the sixties, often created these objects, as well, in “soft, pliable” versions, allows the artist to almost wipe the grin off our face, as we simultaneously recognize them merely as frauds, simulacrums without a real purpose. If Oldenburg chooses small things that have very necessary roles in our lives, by blowing them up in plastic and paper maiché, he also drains them of their very purpose, forcing us to revisit the necessities of our consumer culture. Yes, we need these “things” in our lives, but why? The answers are always personal, and force us to look within ourselves and reevaluate what our lives are about.
Conversely, growing out of his attempt to classify the sources of the various objects he presents us—the street, the store, etc—Oldenburg miniaturizes in two of the most intriguing installations in this show, “things.” Here real and found simulacrums as well as miniature art creations, as in his fascinating “Maus House” (first shown in Austria), we almost literally crawl into a mouse hole, a small darkened room which permits only 10 viewers at a time, to wonder at the tiny objects created and found by the artist. One might spend hours peering through the glass cases at these things without feeling at all mocking us for the treasures they suddenly reveal themselves to be—except for the fact that, like Duchamps ready-mades, they point up just how much of what we describe as “art” is in the mind of the viewers.
Of particular interest to me, given this year’s My Year volume’s subtext of American violence, was Oldenburg’s revelatory Ray Gun Wing, another miniaturized installation, in which the viewer enters only to discover dozens of dozens of toy guns along with found objects that suggest the shape and form of the violent object so central, apparently, to U.S. society. I spent several long minutes in this exhibition just reconsidering how obsessed our culture is with these abhorrent Freudian-like shapes, a long tube or tubes ending in a “handle” that so accommodates the human digits in search of the “machines” release—a near sexual embracement of an object that usually “triggers” death. Like the American enchantment with the car (drawings of which also appear in this show), the gun or “ray gun” appears to be inextricably intertwined with America male (and increasingly female) sexuality. No wonder the gun owners are so adamant about owning their “machines,” which they could no more easily abandon than the machine that moves them quickly through time and space!
Having spent an hour or so in this fascinating show, I came to reappreciate work that I always admired, but now, suddenly, saw in a new light. Although Oldenburg’s work, influenced as it was by Duchamp and Dada, by a sort of camp/pop look at American culture that rose in the 1960s, it was also far more serious than the work of several of his peers, and remains so even today. As figures such as Jeff Koons and others continue to push these issues further and further into camp spoofs of our consumerism, Oldenburg confronts with those things we take for granted and almost feel we cannot do without. In the near future, perhaps, we shall have to face the costs of energy, health, and plain comfort that these “things” have truly cost us.

Posted by Douglas Messerli at 10:16 AM